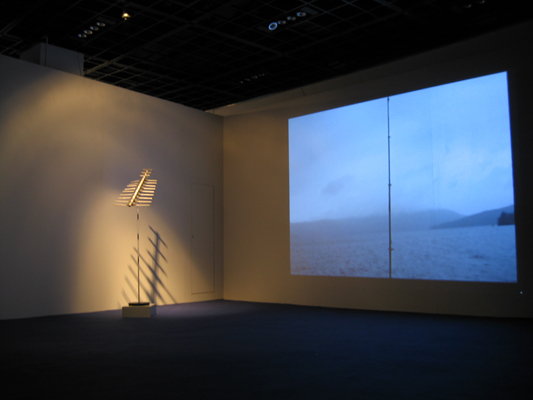 This work, another in a series of reactive, cinematic projects, is composed of an ELF sensor, antenna and large projection of a video database of water i have filmed over the past 15 years in different countries of the world.

The system of this piece is centred around an ELF (extremely low frequency) sensor. Electric and magnetic fields are part of the spectrum of electromagnetic radiation which extends from static electric and magnetic fields, through radiofrequency and infrared radiation, to X-rays. In paranormal research these fields are also closely monitored by people searching for ghosts and other inexplicable phenomena as it is thought that "cold spots" and other signs of paranormal activity reported by persons who think they are seeing phantoms are in fact closely tied to these EMF fields.

The ELF sensor is attached to an old weathered relic of a TV antenna and is transmitting via wifi to a computer running MAX/MSP/Jitter. Any detection of weak fluctuations of frequencies near the antenna results in the direct manipulation of a soundscape which is generated using a sine wave and white noise to create synthetic oceanic sounds. Any readings are also translated as clicks and pops, thereby creating a minimialist audio environment which gives audible evidence of any "presence" in the space.

The other influencing factor of the system is made visible in the gradual white-out of the video image over a period of time - for instance if the work is being exhibited over the course of two weeks then, depending on the number of "hits" in the space, the image will slowly work itself from full chroma to blank. This sense of effacing the work and rendering the image into a ghostly and finally invisible screen closes a circuit or cycle of the works "life", in an allegorical mapping of our anxiety concerning the unseen or liminal...

The database of filmed water is comprised of approximately 2 hours worth of footage, ranging in support from super8 to DV. The clips playback in a random manner, never repeating sequence and crossfade between each other in a flow of data which is responsive to the currents and waves of our natural worlds...