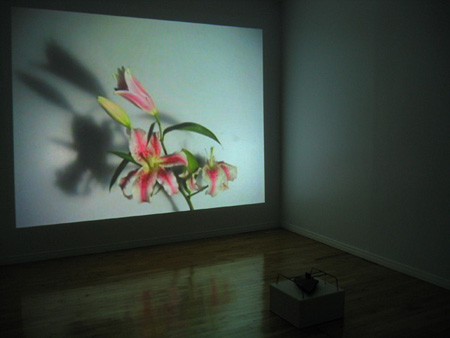 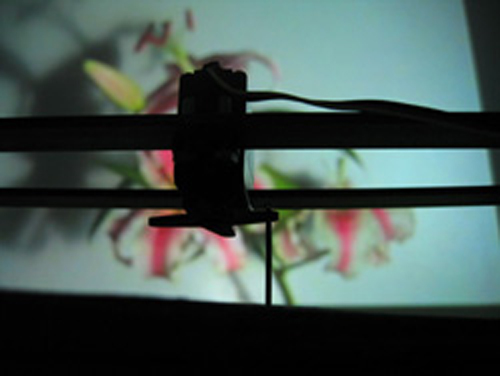 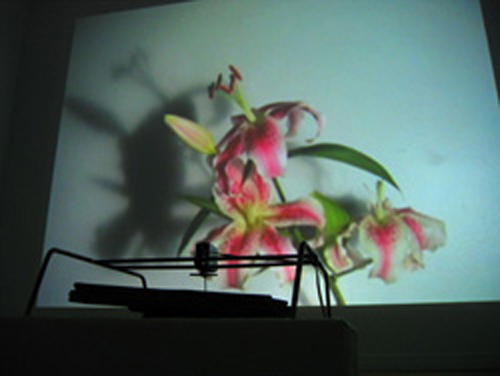 Volat hora per orbem ("The hours fly around in a circle")- Manilius (Manlius or Mallius, Marcus or Caius), from Astronomica

the language of clocks is an installation which incorporates a time-lapse video projection of a lily and a small servo motor attached to a nail that scratches a circle into a piece of shale rock.

In the language of clocks the audio of the work elicits a kind of hypnotic effect, as the system is synced with a metronomic ticking sound to an action and counteraction. As each second passes a frame of the flower timelapse is synchronized with one tick and conversely the motor is timed to the next, creating a pendulum between these two principals. The lily begins in a blooming phase and slowly, frame by frame, works towards a final decay, at the end of which the image returns (at 1 fps) to full life, a rudimentary life cycle forever caught in an ellipsis of representation.

The analogue of the motor ceaselessly carving/scratching a circle into a slab of stone is to be seen as the gentle cliché it is, albeit fraught with an unresolved collective empathy for its inherent pathos. The litany of simile and metaphors which accompany these simple conceptual gestures are legion, however it is the elegiac and sisyphusian traits which, at least to myself, are never properly resolved (either in a corporeal fashion for the individual or in a psycho-social way in culture writ large) and are therefore still encrusted with a modicum of existential fascination/ennui.

The timelapse of the flower took 750 hours to shoot.