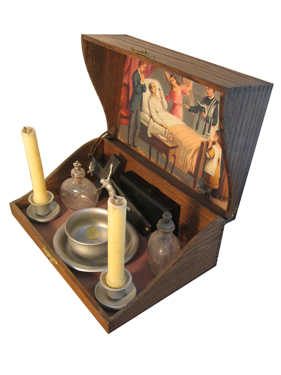 This piece is comprised of an antique Priest’s portable last-rites kit from 1912 and a Schumann Resonator.

The last-rites kit was intended as a mobile form of the classic Catholic ceremony, to be used by the itinerant Priest when attending the bedside of a fading person. The object itself is a signifier of an endgame effort to provide some kind of closure or indeed bridge from one world to the next. The sight of such an elaborate objet d’art in the midst of a confusing and heartbreaking environment must surely have been cause for both alarm and solace. Emitting a kind of numbing aura, the box became, for countless unknown families, a kind of magnet for such charged emotions, a vessel which erased the immediate surroundings of anything but the moment.

I have installed what is known as a Schumann Resonator inside the box. The Schumann Resonances are quasi-standing electromagnetic waves that exist in the Earth's 'electromagnetic' cavity (the space between the surface of the Earth and the Ionosphere). Many researchers in this field believe that the wide spectrum of artificial man-made EMF radiation masks the natural frequency of the Earth, acting as a kind of electro-smog or pollution, which adversely affects living entities. This discrete device generates a field of the 7.83 Hz frequency, the pulsing rhythm of the Earth itself – effacing all other frequencies within a range of nearly 300 feet – viewers may unconsciously sense something within the halo of this effect.

Acting as a metaphor for the blinding effacement encountered in the face of such a charged moment – the rites kit / resonator combination speaks to the notion of the power of objects or spaces to arrest our attention and provide a kind of blinding or blinkered communication, like the way in which an emotionally intensive book, film, work of art or piece of music can literally create an immersive perceptual space for the reader...